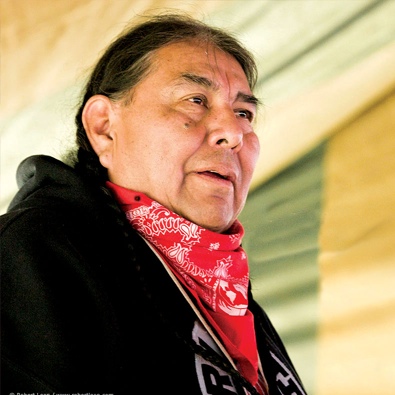 (Dine’ and Dakota) Tom is the Executive Director of the Indigenous Environmental Network. Tom has been awarded with recognition of his achievements throughout the past 40 years as a change maker within the environmental, economic, energy and climate justice movement. From the strength of his community organizing and leadership he brought the local issues of the rights of Indigenous Peoples related to the environmental protection of land, water, air and health to the national and international levels. From his participation and leadership in the First National People of Color Environmental Justice Leadership Summit in 1991 in Washington D.C., to the 2010 World Peoples’ Conference on Climate Change and the Rights of Mother Earth in Cochabamba, Bolivia, and to the recent co-formation of the United Frontline Table and its People’s Orientation to a Regenerative Economy, and its Indigenous Plank, he has been on the forefront of key moments fighting for systemic change. He co-produced an award-winning documentary film in 1999, Drumbeat for Mother Earth, addressing the effects of the bio-accumulation and biomagnification of toxic chemicals in the natural food web and bodies of Indigenous Peoples. In 2007, Tom co-founded of the Indigenous World Forum on Water and Peace lifting up the spiritual-cultural values and ethics of water policy. Tom initiated the first international Indigenous conference on the rights of Mother Earth in 2012 at the Haskell Indian Nations University and serves as a member of the Global Alliance of the Rights of Nature. Tom wrote the IEN Indigenous Principles of Just Transition as an organizing tool of using Indigenous Original Instructions as the foundation for building sustainable and healthy Indigenous communities. Tom is a recipient of numerous awards including the 2015 Gandhi Award and in 2016 was presented Sierra Club’s highest recognition, the John Muir award. Tom is a Sun Dance leader and active in his ceremonial responsibilities and is a father, grandfather and great grandfather.

Next profileRichard Moore
We use cookies on our website to give you the most relevant experience by remembering your preferences and repeat visits. By clicking “Accept All”, you consent to the use of ALL the cookies. However, you may visit "Cookie Settings" to provide a controlled consent.
Cookie SettingsAccept All
Manage consent