While Celebrating the Defeat of Manchin’s Dirty Pipeline Deal, the Just Transition Alliance Continues to Condemn Polluter Subsidies in the Inflation Reduction Act

José was arrested alongside Tom B.K. Goldtooth, executive director of the Indigenous Environmental Network and a Just Transition Alliance board member, while physically blocking entrance to the Senate Hart Office Building, the location of Sen. Manchin’s Capitol Hill office. Others representing the mainstream environmental movement were also arrested.

Several days later, with criticism from both progressives and Republicans for their own reasons, Sen. Manchin publicly issued a request to Sen. Schumer to remove permitting language from the Continuing Resolution. 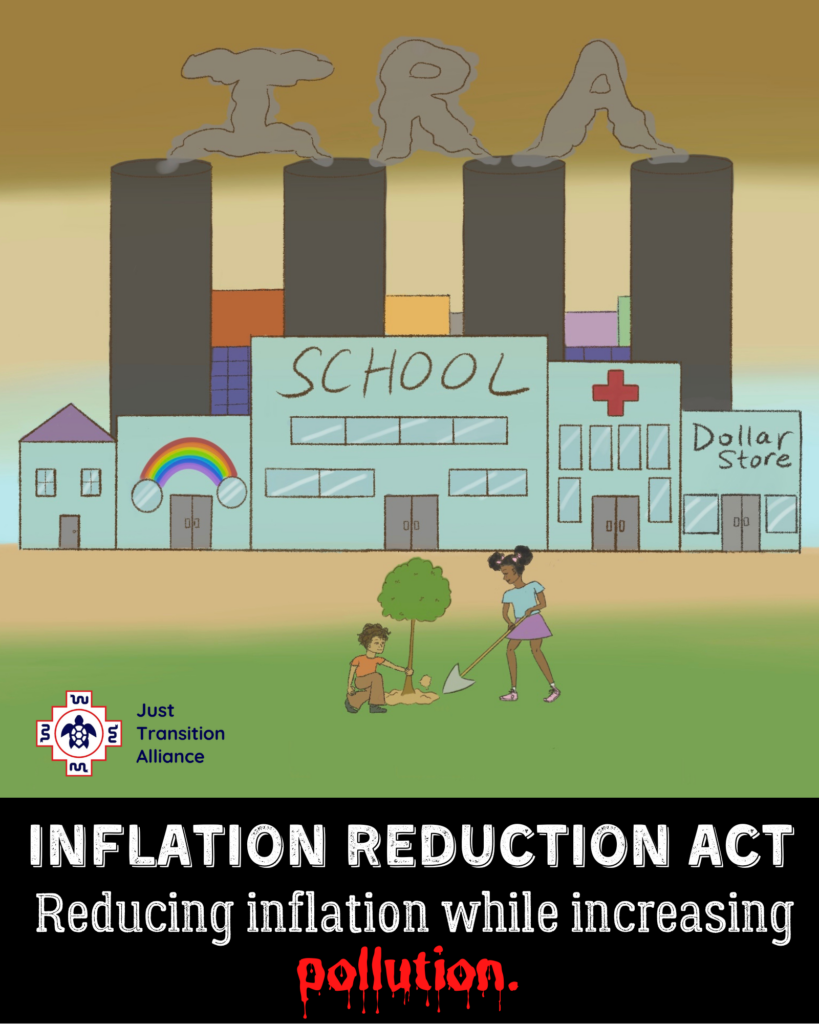 While we join others within our movement in celebrating this move as a victory, we do so cautiously. The Biden administration has since issued a statement saying, “We will continue to work with [Manchin] to find a vehicle to bring this bill to the floor and get it passed and to the President’s desk.”

Meanwhile, Just Transition Alliance has not forgotten about the political collusion that prompted us to take action to begin with—the passage of the Inflation Reduction Act of 2022.

As long as the Inflation Reduction Act continues to be implemented, the Just Transition Alliance will continue to warn Congress and the Biden administration that we will not stand by in silence while they gamble with the lives of our communities.

The Act threatens the future of our children with billions of dollars of subsidies to the fossil fuel industry. The White House claims the Act will advance clean energy and create many “good union jobs.” The fact is, the Inflation Reduction Act perpetuates a decades-old problem of pitting workers and our environmental justice communities against each other in yet another false “jobs versus environment” binary debate.

The interconnectedness of worker and environmental well-being manifests itself in environmental justice communities, as extractive practices harming the planet also impact human health. We recognize the critical need for compensation to coal mining families who’ve suffered terrible illness, loss and death. All communities that have been harmed by the health and environmental legacy of dirty energy industries need to be compensated and made whole again.

A just transition is more than just a feel-good term used to greenwash outdated industrial practices such as burning coal, oil and gas. Just transition principles require us to seek pathways where both a healthy economy and a clean environment can co-exist. These principles also require the leadership and voices of frontline workers and fence-line communities to be central at all policy tables where our lives and livelihoods are impacted.

Therefore, it should come as no surprise that people of color communities, Indigenous communities, poor communities, and frontline workers are at risk of suffering additional harm from the enactment of the Inflation Reduction Act. Our communities were, once again, sold out because we were not at the table and because this Act is riddled with money lavished on corporate schemes and techno-fixes.

But here is the problem: Nowhere is there mention of resources to enforce these regulations or provide support for meaningful public oversight. In order for the administration to ensure adequate enforcement of air, water and soil regulations, the Act needs to put forth the resources needed. Without such measures, the Act is simply window dressing.

The Act also subsidizes false climate solutions. Contrary to all of its environmental justice components, the Act sets out to burn billions of public dollars on dangerous and harmful technologies like carbon capture sequestration (CCS), nuclear power and bioenergy—perverse subsidies for unproven technologies that will only increase toxic burdens and financial risk for communities of color, poor and Indigenous communities. Not only will these corporate techno-fixes fail to create additional jobs, they will simply expand the operations, market control and profits of the world’s largest polluters. These massive polluter subsidies will keep critical investments from going to the proven solutions we desperately need, such as local, distributed energy, zero waste and mass transportation.

And then there is the promise of “clean energy.” Even where the Act provides investments for key “clean energy” sectors, the approach is flagrantly flawed, such as building an electric car economy. Our planet cannot sustain the widespread buildout of rare earth mining for minerals like lithium. Providing such massive market advantages to manufacturers of single family vehicles, over the critical need for mass public transportation, is simply short-sighted. If there is one thing the pandemic should have taught us is that we desperately need to localize collective transportation—that is safe and free to everyone—as with all other sectors of our industrial economy.

The earth’s natural limits cannot afford millions more electric cars for single family use, just as we cannot afford industrial practices like planned obsolescence. Similarly, we can no longer pretend that massive hydro-electric projects or hydrogen fuel that relies entirely on sustaining the oil and gas sector are in any way, shape or form “renewable.”

Not to mention, when workers see proposals for clean energy jobs and the likely wages for those jobs, their reaction is typically, “This is why we’re worried about it. Nobody is coming close to proposing salaries we’re earning now.”

We demand that Biden, Schumer and Manchin end this fossil fuel shell game, which they deviously mask as an altruistic plan to address climate chaos, reduce inflation and provide justice for communities.

To all Congressional Democrats, we demand that you stop dancing to the toxic tune of Manchin’s marionettes. Our planet is burning and the Inflation Reduction Act is just adding fuel to the fire.

We urge you to look at the road you are paving for the opposition by perpetrating this bipartisan egregiousness of putting corporate greed before human need. We demand there be stand-alone legislation on real climate solutions and real non-polluting jobs, both of which merit separate policies that aren’t hidden in an omnibus Act.

We urge the White House to listen to the 650-plus organizations that are demanding a declaration of climate emergency and to refuse any attempt to make good on the dirty deal.

We demand that Biden and Congress promote legislation that leads to localizing and democratizing our economy for a just transition.