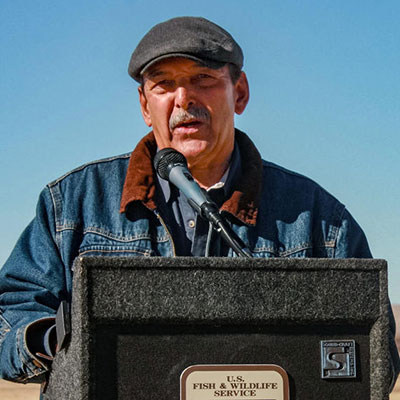 Richard Moore served as the Executive Director of Southwest Network for Environmental and Economic Justice (Southwest Network), in Albuquerque, New Mexico, from 1993 to 2010. He came to Southwest Network after 12 years with the Southwest Organizing Project (SWOP) where he was the lead organizer and primary trainer of SWOP’s organizing model. As a widely respected national leader in area of environmental justice, Mr. Moore has served on numerous government and nongovernmental committees and panels, including chair of the National Environmental Justice Advisory Council (NEJAC), and member of the National Council of Churches EcoJustice Task Force and the Congressional Black Caucus National Environmental Policy Commission. In 2010 Moore transitioned from director of SNEEJ to Senior Advisor. He currently is the program director for Los Jardines Institute in Albequerque New Mexico. Los Jardines is a member of the Environmental Justice & Health Alliance for Chemical Policy Reform through this alliance Los Jardines advocates for stronger, safer and just chemical policies. Mr. Moore is a recipient of the 2005 Ford Foundation Leadership for a Changing World Award.

Next profileNona Chai
We use cookies on our website to give you the most relevant experience by remembering your preferences and repeat visits. By clicking “Accept All”, you consent to the use of ALL the cookies. However, you may visit "Cookie Settings" to provide a controlled consent.
Cookie SettingsAccept All
Manage consent